SpaceX might just send YOU to space – find out today

SpaceX has its first victim… er, passenger, we should say. That’s right – the first person to fly around the moon in the company’s BFR has been selected. What is a BFR, you ask? It is the ‘Big Falcon Rocket’ which consists of two parts: A massive rocket booster that will out-power anything every built and a spacecraft that will shoot right out of the Earth’s atmosphere – brought to you by SpaceX.

Today’s announcement marks the first steps… to sending regular people to the moon and SpaceX will be identifying the first person to go today! Up to this point, Elon Musk has kept quiet about the identity of this individual and the financial terms of the deal.

Don’t get too excited… because the BFR is probably several years away from its initial flight. However, the spaceship portion of the rocket could start testing as soon as 2019. SpaceX COO said that the rocket is likely to take flight within a decade, which probably a more realistic timeline given Musk’s overly-optimistic way of thinking. So it is probably more than several years away… 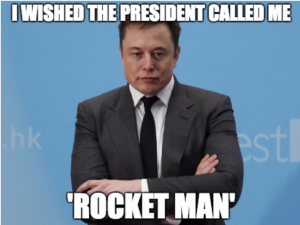