You probably didn’t lose this much on bitcoin

Cryptocurrency has lost $400 billion… and this figure includes Sean Russell’s life savings. Russell invested $120,000 in bitcoin last November…and if you know anything about bitcoin, you would know that number magically grew. Scratch that – that number exploded to $500,000 in a month.

The highs and lows… bitcoin was once trading over $20,000 per unit; now it goes for around $6,300. Russell has lost 96% of his life savings, after initially quadrupling it. Yes, the once-promising returns of bitcoin seem to be gone for good. But how does something like this even happen?

It happens because… people have no clue what they’re doing. People that wouldn’t normally invest, like college students (no offense if you are one), started buying into the bitcoin frenzy and jacking the price up far beyond what it should have been. You know, like a bubble – and that bubble isn’t done bursting because, last week, bitcoin dropped another 20% in two days…just for good measure. 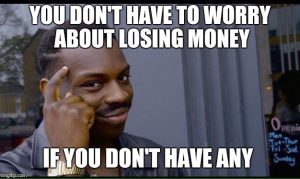